Checking temperature differences is a matter of great concern at all levels in the field of science. This attempts to provide humankind suitable technologies for battling climate change. At the level of technical applications, the correct temperature for comfortable surroundings, the safety and mainly the efficiency of processes are all a major factor in energy and material efficiency.

In the programmable materials cluster, the focal topic of programmable heat transfer involves researching the options of developing materials such that they can produce ideal temperature conditions without complex sensor-actuator-communication networks. Particularly in claddings, automobile chassis and housings of power electronics, the cluster sees great potential for materials that allow self-regulating temperature control with lower material usage.

In the focal topic of programmable heat transfer, the cluster investigates different mechanisms regarding their suitability in programmable materials, including phase change, electromagnetic activation, sorption and capillary line as well as the change in the condition of filters.

The researchers assign a particularly important role to phase change materials. These materials are generally known within applications as gel-heat pads, where a phase change is initiated by kinking an integrated chip. They usually contain salt hydrates, which can transform from liquid state to solid state via an electrical impulse trigger. The cluster develops phase change materials mainly for the application in claddings and room shells. There are diverse solutions in this area, but they are all based on complex sensors that are too complicated or costly for large surfaces. Phase change materials could keep rooms cool during warm phases by absorbing heat and provide heat quickly in cold phases at the touch of a button. They would be conceivable, for example, as a coating for less frequented rooms such as meeting rooms, where one does not want to spend too much money heating them, but would still like to find them at a pleasant room temperature on entering. Even in neighborhood management, programmable materials enable new methods for affecting microclimates, for instance, in city centers. If building walls emit their stored heat independently only at night under clear skies, overheating could be avoided during the day. Phase change materials offer an interesting option even in greenhouses for tempering the planted cultures, if they are introduced as temperature modules in the root area of plants.

The cluster also investigates additional mechanisms in the area of cladding. These include window panes, the heat transfer value of which can be changed in a modular way by pumping gases in and out into intermediate rooms. Polymer foams with shape-memory properties that regulate the transfer of heat between the façade (depending on its structure) and the surrounding area via a modular insulating material is also a promising research topic for the cluster.

These mechanisms are also used in the field of mobility, such as for cooling electric motors or batteries. Batteries in electric vehicles have very special temperature requirements. They must generally be maintained at a constant temperature even in case of fluctuating outside temperatures, which is a challenge for conventional materials. Not only could adaptive programmable materials cool at warm outside temperatures and insulate at cool outside temperatures, but they could also quickly dissipate heat in case of damages to prevent fire, and thermally insulate the surrounding cells from the cell in question to prevent the fire from spreading in the form of a thermal runaway.

Overall, the cooling of electronics is a highly interesting research area for the cluster, particularly in the field of power electronics in microelectronics, because effective cooling was inconceivable till now due to lack of space. Here, the cluster takes into account thermal diodes and the method of switching them on and off using surface coats so that evaporation processes can be specifically controlled.

In addition to the separating components and cladding with loadable and unloadable storages, the cluster also dedicates itself to the function element of transport media as a focus of its research. Transport media plays an important role in temperature control, especially in liquid form in air conditioners or refrigerators, and should “deal with heat” as effectively as possible, i.e. absorb as much heat in the refrigerator as possible, dissipate as much heat as possible on the rear wall and maintain a steady state between these points to preserve the contrast.

At the moment, one of the main challenges of the focal topic of programmable heat transfer is the identification of particularly adaptable material combinations and fruitful research areas due to the existence of extremely diverse possible applications. For this purpose, the cluster is currently coming up with well-founded scenario analyses and narrowing down potent materials.  One result is that as a method, cooling of buildings using programmable materials is preferred to heating of buildings due to the higher potentials and greater technical feasibility.

Due to extensive preliminary work of cluster members and their versatility, at the moment phase change materials are the focal topic of the research activities. As a demonstrator, a table exhibit must first be implemented that clarifies the functionality. The challenges of phase change materials that are yet to be addressed are mainly the (remote) activation of the complete hydrate mass and the programming of the exact focal point and are therefore the main focus of the research efforts.

In the area of polymer foams, reproducibility is a major subject. Here, methods must be developed for setting two-way shape-memory effects; realizing higher switch frequencies must also be facilitated.

In the long term, the cluster also wants to include radiative heat transfers in its research. For this purpose, the participating researchers wish to design the surfaces such that the radiative transition is optimized. Interesting fields of application would be asphalt for instance, which should not radiate so much, or solar panels that can capture lots of light. 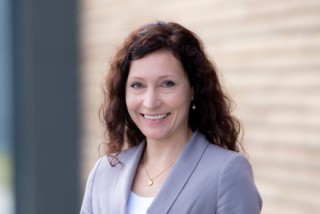